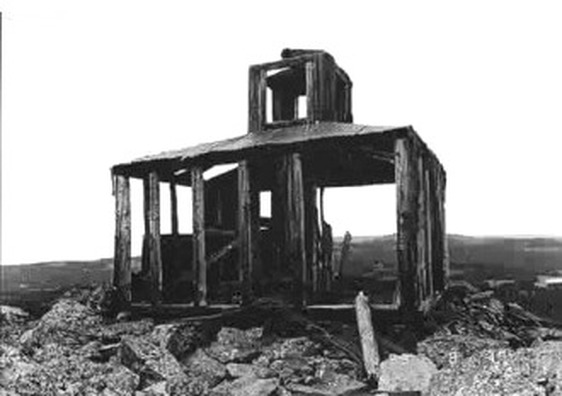 No date
U.S. Forest Service photo
August 11, 1911:   "Each year witnesses improved facilities for properly conducting the work of caring for the Battlement National Forest.  Among the improvements this year is the look-out station on Leon peak, now nearing completion.  This peak, which stands several hundred feet higher than any other point ,on the reserve, is made up of huge volcanic boulders, jumbled together in such manner as to prevent any beast of burden from traversing it.  To the summit of this peak timbers and iron sheathing have been transported, coolie fashion, to build a comfortable little house, 12 feet square, which is surmounted by a cupola, or lookout tower, where all day long a ranger will sit, during the danger season, scanning the surrounding country in search of the telltale spiral of smoke which marks the beginning of a forest fire.  A telephone is at hand by which warning can instantly be communicated to any or all of the ranger stations.  This lookout station was erected by Ranger Clay Wintersteen, who will have charge of it this season."   (Plateau Voice)
August 14, 1911:   "A lookout station, built on the summit of Leon peak, the highest in the Battlement meas forest reserve, will be completed in a few days and will be used as a sort of conning tower from which the forest ranger may watch for spirals of smoke which indicate the presence of a potential fire.
This lookout station was built at no little trouble, the materials have been carried by men up trails that a burro could not have climbed and put together into a comfortable shack for the lookout.
The station will be equipped with a telephone so that any of the ranger stations in the reserve may be immediately notified as soon as the fire is seen.
Leon peak is near the Plateau valley portion of the reserve and the work was done by Ranger Clay Wintersteen, stationed near Colibran."   (The Daily Sentinel)
August 23, 1912:  "Carl Pfeiffer has been employed for a time to have charge of the lookout station on Leon Peak.  He goes up today to take charge."  (Plateau Voice - Colibran)
September 5, 1913:  "Ben Suchre was down a few days this week from his lofty lookout station on Leon peak, rains in the higher country having eliminated all immediate danger of forest fires.  Ben says the peak is not so lonely as might be supposed, that he has had over 50 visitors since he took the station."  (Plateau Voice - Colibran)
September 26, 1913:  "The dangerous period for forest fires on the Battlement National Forest is now practically over.  There have been no fires, but numerous smokes reported by the guard at Leon Peak lookout station have demonstrated the value of the system used in getting quick action when a fire occurs."  (Plateau Voice - Colibran)
August 28, 1914:   "Excessive precipitation during July and August has so far reduced the fire danger compared with normal seasons that it has not been deemed necessary to keep a man at the Leon Peak Lookout station; but, it is expected that it will be necessary during September and possibly October."   (The Daily Sentinel)
September 7, 1914:   "Forest Guard Bloss has gone to the Leon Peak Lookout station for duty there during the fire danger period."   (The Daily Sentinel)
September 11, 1914:  "Four hundred and fifty sections are within the area of visibility of the Leon Peak lookout station.  By means of the equipment at this station, it is possible to determine within a very short time, not only the direction of fire, but also its location, and telephone communication with the supervisors office in Colibran makes it possible to have men in the field on the shortest possible notice."  (Plateau Voice - Colibran)
1919:  "Upon the summit of Leon Peak, 10,954 feet high, on the crest of the ridge of Grand Mesa, a fire lookout station has been established by the Forest Service.  From this point a large portion of the Battlement Forest can be seen.  While the station was built primarily for fire-observation purposes, it offers an excellent opportunity to the summer traveler to view a large area of mountain forest.  The numberless lakes nestled in the catchment basins between the long lava ridges offer a wonderful spectacle as the passing clouds throw this one into bold contrast of direct sunlight, and the next one into darkness of shadow.  One lake may be still, while another suddenly presents a troubled surface, caused by a passing gust of wind.
From De Beque and Grand Junction an automobile road goes to within 4 miles of the lookout station; the remainder of the distance, to within half a mile of the top, can be made by saddle horse; thence a foot trail leads to the summit.  The total distance to the peak from Grand Junction is 55 miles, and from De Beque 40 miles.
The Leon Peak lookout forms but a part of the system of fire protection by which the resources of the Battlement National Forest are guarded during dry periods of the year."  (Vacation Days in the Battlement National Forest)