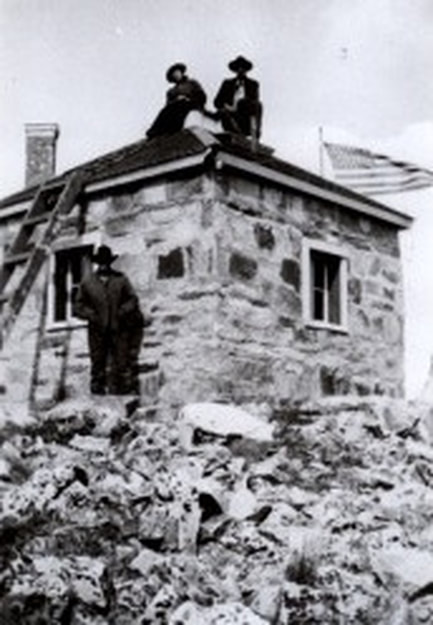 No date
Wyoming State Archives Historical Photo Collection, Cheyenne
November 12, 1909:  "This section of the country was visited by a light snowfall Tuesday night.  While it remained on the ground in the valley for only a few hours it refreshed the atmosphere to quite an extent.  The fall was much heavier in the mountains and will probably remain great relief to Forest Supervisor Blackhall as the weather has been unusually dry in the mountains for the past few months, making conditions just right for starting of big forest fires.  Mr. Blackhall was determined to take no chances and has for several months had a ranger riding the divide between Bridger peak and Hog Park looking for signs of fire."  (Grand Encampment Herald)
June 29, 1911:  "Supervisor James Blackhall of the Hayden National Forest, of Encampment, was down over Sunday and while here made the Sun a pleasant visit.  He says it is his intention to build a lookout station on the top of Bridger Peak in the Sierra Madre range and station a man there during the summer to keep a lookout for fires.  The building will be stone and cement.  The watchman will be J.P. Aredell, the man who made the discoveries of gold in Gold Hill in 1889.  This station will be connected with Mr. Blackhall's office by a telephone line constructed along the tramway of the Penn-Wyoming Company.  It is said that the entire Hayden National Forest can be seen from the top of Bridger Peak, (which is 10,000 feet in height) as well as the entire western part of the Medicine Bow National Forest.
Mr. Blackhall says they are distributing fire tools at different points in the forest for use in case of fire.  Last year they had but five fires and succeeded in putting out every one before any had consumed more than half an acre of timber."  (Saratoga Sun)
November 17, 1921:   "Sixty persons registered their names in the National Forest travelers' register in the lookout house on Bridger Peak this summer, which is considerable more than ever registered there before in any season, and five times as many as registered in 1920."   (Encampment echo)